NASSCOCAPITAL GROUTING VS INJECTION PRE-REHABILITATION GROUTING – WHAT IS THE DIFFERENCE?

NASSCO’s Infiltration Control Grouting Committee (ICGC) released two new sewer specifications, replacing the 2014 Suggested Standard Specification for Pressure Testing and Grouting of Sewer Joints, Laterals, and Lateral Connections Using the Packer Method with Solution Grouts. Shortly after its release seven years ago, the suggested standards for grouting quickly became the choice document for engineers and municipalities who wished to include grouting in their projects. Used as a basis to standardize the execution of testing and sealing mainline and lateral joints, and their mainline intersections through the packer injection method across the industry, the specification provided direction as to the calculation of the gel times to be used, how to address pipe preparation, quality control for the final product, and a description of typical bid items. 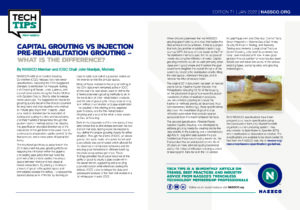